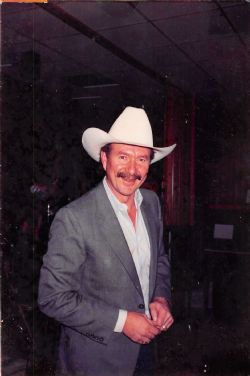 Johnny was born September 17, 1946 in Pyatt, Arkansas to the late Theron Edgbert and Nina (Stanley) Patton. He graduated from Pyatt High School, was drafted into the United States Army at age 18 and served in Korea for two years during the Vietnam era.

True Country is the best way to describe Johnny Patton. Johnny was recognized as a country performer who would quickly make an audience feel at home. The Arkansas native started playing fiddle at the age of five. Johnny went on to Nashville at the age of 17, determined to get a recording contract, and he accomplished just that. In Nashville he composed many chart hits with some of the best session players in the business. As his career continued to grow over the years, he accomplished many things in the country music industry, including performing on stage at the Grand Ole Opry. Johnny owned a popular 2000-seat night club - "Johnny Patton's Hitchin Post USA - Club of the Stars" in Springfield, Missouri. He regularly performed there and booked many stars including Waylon Jennings, George Jones, Reba McEntire, and Merle Haggard to name a few. Johnny enjoyed touring on his bus with his five-star band and visiting many of his friends and long-time fans. Few entertainers could touch an audience as Johnny could in his songwriting and deeply felt vocals. He performed and composed from the heart. Once you had seen Johnny perform, you became an instant fan; a professional country gentleman in every sense of the word.

He is survived by his daughter: Alice Due and her husband (Dewayne), of Pyatt, Arkansas; his former wife: Vicky Patton, Springfield, Missouri; stepdaughters Wendy Burns and her husband, Richard; Jamie Gassel, all of Springfield, Missouri; grandchildren: Dane Due, DJ Due, both of Pyatt, Arkansas; Victoria "Tori" Lacy of Elkins, Arkansas; his sister Anita Tabor of Fairbanks, Alaska; and a host of nieces and nephews, family and friends.

Johnny was preceded in death by an infant daughter, Jennifer Lynn, his parents Theron and Nina Patton, brothers: Will, Sam, Vernon, and Duel Patton, sisters: Mary Allen, Norma Auslem, and an infant granddaughter Ellison Due.

Pallbearers will be Dewayne Due, D.J. Due, Willie Caviness, Dane Due, Steve Due, and Richard Burns.

A private family burial will follow at Patton Family Cemetery.

Prayers goes out to family members. Gone but never to be Forgotten.. Will miss him .. Rest in Peace my friend. Huggs and Prayers .

My thoughts and prayers for his family and friends. I always loved dancing to his music. He was a great guy that will be missed by all.

Johnny Patton,
You gave me my first bartending job and I started on my 21st birthday at the Hitching Post USA and worked for you for many years. Through those years we became really good friends. I know I wore you out asking you to play I know all about her, but you always would. You reminded me of my dad in so many ways and how ironic, you were born the same day and even the same year. May your soul rest peacefully and if heaven has country music I know you will be headlining that stage buddy! Much love, Shawn P.

You have my deepest sympathy .

IM TRUELY SORRY FOR THE LOSS OF Johnny Patton I will never forget him as a boss friend and just a great guy R.I.P.my friend

Cousin Johnny was so much fun and such a caring person. I will always remember our visits and the stories he told. He will not be forgotten by his Oklahoma family! Prayers for Alice and the rest of the family. We all lost a good man!

One memory of Johnny I will never forget is when I was really little ever time he would come home, he usually came by our house and I would always have him sing Rhinestone Cowboy for me. He never failed to Do that for me. He was a good man and will be truly missed. My prayers for peace and comfort for Alice and the rest of the family. Love Kim

What a good friend Johnny was had a lot of good times and laughs with him and friends at H post his songs always bring a smile and lift me up I listen to them every week he was one of the best singers from these parts of the ozarks. Was always good to me be 5 people in the joint or 500 always mentioned and played my favorite song good bye my friend we will meet again!

My heart and prayers go out to all. Johnny was a treasured friend.

I knew Johnny Patton for a long time I even took care of his sister Norma Auslam they are the best folks that you will ever know.Johnny will be missed and my prayers go out to the rest of the family. May God bless you all.

I was so saddened to learn of Johnnys passing. So many good memories. So sorry. You will be in my prayers.

We send our condolences to all of Johnny's family.

So very sorry for the loss of Johnny. Saw him many times in the 80's in Springfield.

I remember going to dances he held at the Summit Community Building. He always dedicated Merle Haggard's 'Working Man Blues' to my Dad, Huey. Johnny was great at performing. God bless his family.