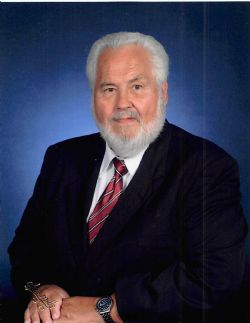 Ted Hotaling, 84 of Memphis, Tennessee, passed away on Sunday, April 21, 2019, at Rainbow Rehabilitation. Ted was born May 21, 1934, in Albany, New York., the son of Veronica and William Henry Hotaling. His early childhood spent with his maternal grandmother, Caterina Szymanski, a Polish immigrant, and his uncle Ted Szymanski influenced his lifelong use of the Polish language. He graduated from Schoharie High School, New York, and attend Hartwick and Siena Colleges on New York State Regents scholarship. Ted was married June 24, 1956, in Schenectady, New York, to Elaine Hope Swartout. He served in the US Army, 1957-59. He was employed in advertising sales for several New York and North Carolina newspapers and radio stations.

In 1969 Ted and Elaine, and their two daughters, moved from upstate New York to North Carolina, residing in Pilot Mountain and Sanford until 1999, when the couple retired to Memphis, Tennessee. Active in the Raleigh United Methodist Church, Ted served as Trustee, Placement Coordinator in the Job Ministry, and Sunday School Teacher. A highlight of every month, in recent years, was the Bible study held in Ted's home. Following a special dinner, that he would prepare, he often shared a poem he would write expressing his faith journey, his love of family and friends, and his appreciation of nature.

"A Service of Death and Resurrection" will be held Thursday, April 25, at 11:00 AM at Raleigh United Methodist Church, 3295 Powers Road, Memphis, Tennessee 38128. The family will receive friends from 10:00 AM to 11:00 AM, prior to the service. The family requests that memorials be presented to Raleigh United Methodist Church Food Pantry, 3295 Powers Road, Memphis, Tennessee 38128.

We feel blessed to have had the opportunity to share many hours working with, laughing with, and sharing meals, faith, and ideas with Ted. He introduced us to many Polish foods, customs and language. Ted had a big heart and a big love for his fellow man. He spent hours tirelessly working to help others find jobs and better their lives and exploring ways to serve his Savior. Ted will be greatly missed.