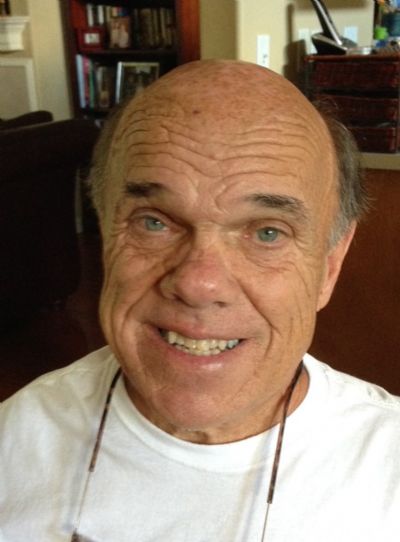 Softly and tenderly, Jesus called Frankie Clay home on Sunday, November 20, 2022.
He passed very quietly and peacefully in his sleep at St. Bernard Hospital in Jonesboro, AR.
Frankie would have been 77 years old on December 21, and if possible, he would have argued with God to let him have extra time to turn 77 so he could brag about being so cute at his age. That was our little "sweet 'n low"!

Frankie grew up in the small town of Marion, AR with a population of 365, and when the Clays arrived, we boosted that number to 374. Frankie had many friends and loved the adventures that a small town afforded and he was in the middle of all of it. He never met a stranger and never said he couldn't do something because of his size. His work career began at Heck's service station where he climbed a ladder and washed wind shields, and on the side, he would sell popcorn to customers. Fabulous Frankie was his studio wrestling name when he was 16. He was the office manager for the Crittenden County Road Dept., dispatched for Roadway Bikes, managed a shoe store in Kentucky, was mascot of a pro basketball team, starred in commercials and played an elf for schools at Christmas. The most proud event was going on several mission trips to Turkey with his church in Little Rock, AR. Frankie read his Bible every day and wrote scripture in his journal to remind himself that Jesus was his Lord and Savior.

Frankie was a lover of his family and would recite to friends their accomplishments.

Frankie was born December 21, 1945 in Memphis to his mama and daddy, Frank and Ruby Clay. His grandparents were B.F. and Lydia Clay and Doug and Mary Tacker.

He loved and cherished his daughter, Tammy Prince of Heber Springs, AR and told everyone so.

His surviving brother, Steve Clay (Regina) and sister, Mary Clay Dunlap (Eddie), grieve and shed tears for the loss of their BIG Brother.

In lieu of flowers, please give a memorial in Frankie Clay's name to his home church; Temple Baptist Church, 2834 Race St., Jonesboro, AR 72401.