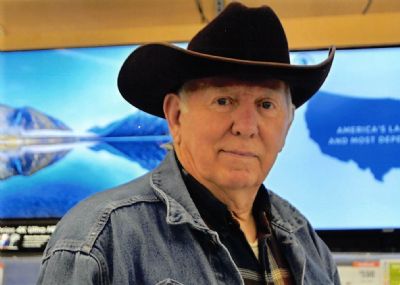 He was born to James and Dolly Opal (Hale) Williamson on February 14, 1940 in Denver, Colorado.

Jack was a remarkable man. He was truly a "Jack" of all trades. He married
Garnet Stein in March of 1959. They raised two children, Kari Jean and Todd, and
in 2009, before Garnet's death, they celebrated 50 years of marriage. Early in his
life, Jack worked at Boeing, building B-52s. Shortly after, he enlisted in the Navy,
where he developed his love for photography. After leaving the Navy, he returned
home to his beloved Seattle where he went to work for Kenworth. Jack also
worked at Pioneer Enamel, where he made fireplaces. Later he worked for Gallery
of Kitchens where he was Supervisor of Carpenters and Installers. He also was an
entrepreneur, owning a radiator repair shop, an insulation business, and a
doll/coffee/ice cream shop, before retiring in the early two thousands in Seattle.
After his wife's passing, Jack met and married Laquida and in October of 2010, he
moved to Batesville, where he quickly made friends and made this his home. He
and Laquida enjoyed traveling to Seattle for summers at his home there, as well
as many weekends at their cabin in Strawberry.

Jack was an avid fly fisherman; he learned to fly fish from his Uncle Bob Hale
during his childhood summers on the Platte River at a dam site that provides
water for the City of Denver. He also loved to fish for salmon in the Pacific Ocean.
Jack loved making memories through his millions of pictures. He recorded family
times, historic sites, travels, and most anything that intrigued or interested him.
Some of his most beautiful pictures, which many of you have had the pleasure of
receiving and enjoying, were of Mt. Rainier and Snoqualmie Falls in his home in
Seattle, as well as beautiful pictures from his second home in the Ozark
Mountains, which he called hills. Jack saw art in God's creation and loved sharing
it with friends and strangers alike.

Jack had a servant's heart, and many of you have been the recipients of that great
big heart. Jack read and studied his Bible every day of his life. He was a member
of the Isaquah Church of Christ in Washington, and most recently, he served the
Lord here at Harrison Street Church of Christ. Jack has run the race, and he has
received his prize.

A memorial service will be held at Harrison Street Church of Christ on Sunday, September 26, 2021 at 2:00pm with Theron Isaacs and Todd Williamson officiating.

The family request no flowers, instead, they would prefer memorials be made to Paragould Children's Home, 5515 Walcott Rd, Paragould, AR 72450, or Old Independence Regional Museum, 380 S 9th St, Batesville, AR 72501.