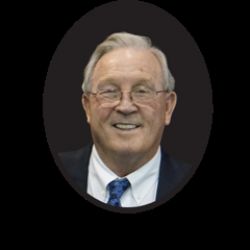 William Whitehead, Husband, Father, Grandfather, Farmer, Friend to Many, passed away on July 13, 2021. William was 76 years old and a life-long resident of England, Arkansas. He had a kind heart, a beautiful spirit, and a passion for helping others.

In 1965, William married the love of his life Karen Archer Whitehead. They created a family, built a farming business, and traveled the world together. They were inseparable until he succumbed to pancreatic cancer.

In 1966, William bought a small grocery story, Whitehead Supply in Wright, Arkansas. He started farming in 1967 at night after he closed the store, renting a tractor and 17 acres. Over the next 53 years, he expanded to farm thousands of acres. His first 3 employees John Harris, Jim Harris and James Davis worked with him for 50+ years and became part of the extended Whitehead family.

William was a member of Scott Products a farmer's co-op and served as its President for many years. He enjoyed annual trips with the Scott Products group for over 30 years, and no matter where in the world they travelled, his favorite sightings were tractors and other interesting pieces of equipment.

According to William, his family was the greatest joy of his life. He was passionate about education and his goal was that his children become the first college graduates in the family, which they did. He was equally joyed when his son followed in his footsteps and started farming with him in in 1995.

William was deeply involved in his community. He helped others whether providing loans or sharing his advice; he always had time for anyone that needed him.

He served on the Mulberry Cemetery Association board for 47 years and as President for 35 years. When he joined the cemetery board, it was struggling financially, he worked diligently to raise funds so that it could operate properly. He believed we should honor our ancestors by upkeeping cemeteries as a place to pay respect. One passion project was the building of the Mulberry chapel pavilion so that services could be held in any type of weather. Services will be held there to honor his life. Another cemetery that was special to him was Nellum Cemetery where he also considered himself a steward.

He is survived his wife, Karen Whitehead, his children: Beth Whitehead and her wife Linda Lockwood; Brad Whitehead and his wife Jill; he was ''Pops'' to his two ''favorite'' granddaughters: Mallory and Lauren Whitehead as well as two granddogs, Roxie & Scout; by his sister Mary Whitehead Powell and many nieces and nephews; Jim Harris and James Davis.

He is preceded in death by his parents HM Whitehead, Sr., Nellie Fields Whitehead and his brother Harry Whitehead; Herchel and Betty Archer whom he referred to as the best in-laws in the world; John Harris, Whitehead Farms employee #1.

Visitation will be Friday, July 16, 5-7pm at Roller England Funeral Home; Service at Mullberry Cemetery Chapel Pavilion Saturday, July 17 at 10am. In lieu of flowers, please consider a donation for the upkeep of Mulberry Cemetery or Nellum Cemetery.