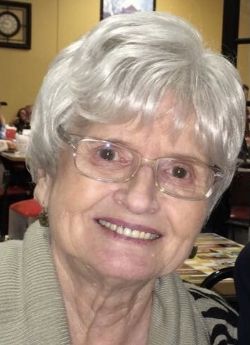 She is preceded in death by her parents, her sister and five brothers, her first husband of 34 years Billy Don Wells, her second husband Orville C. Miller, and two grandsons, Nick and Chris Webb.

Born at home to George and Annie Mae Boswell on August 20, 1936 in Sulphur Rock, Arkansas, Rebecca was the youngest of seven children. The Boswells were a modest farming family who picked cotton and lived on the crops and chickens they raised. Rebecca loved to tell about how much she enjoyed helping her mother make sauerkraut. Miss Annie would put shredded cabbage from the garden into a crock with salt and vinegar. During the weeks of fermenting, it was Rebecca's coveted job to test the kraut every few days to see if it was ready.

Rebecca enjoyed playing basketball for the Newark Kangaroos during high school. After graduating valedictorian from Newark High School in 1956, Rebecca briefly attended nursing school before falling in love and eloping with Billy Don in 1957. Don and Rebecca raised their three children in a small house on Allyson Circle in Little Rock over the next two decades. During that time, they also took in Rebecca's elderly mother and two of her ailing brothers.

For many years, Rebecca served as the church and school secretary at Heritage Baptist Church / Heritage Christian School where the family attended church and where her three children attended school. She also worked as an accountant at CARTI on the St. Vincent's campus in Little Rock for twelve years before retiring.

Rebecca was a thoughtful, artistic person who enjoyed writing poetry, painting, and doing all kinds of needlework from knitting, crocheting, macramé, and quilting. She even dabbled in playing the violin and harp and once recorded an album entitled ''Beyond Tomorrow'' singing alto with a ladies trio called the Harmonettes. However, the defining art of Rebecca's life was her beautiful talent for playing the piano. Rebecca began playing the piano when she was a young child. Her aunt Rebecca gave her a piano and taught her how to play. Rebecca became a church pianist in her teens and played the piano and organ for church for nearly the rest of her life. Rebecca could play virtually anything with both sheet music and by improvisation. Her family has many fond memories of listening to her practice on the piano at home for hours at a time over the years. One of the highlights of her later years was being able to share her talent by teaching her great-grandchildren how to play the piano. Honoring her aunt's gift to her, Rebecca has now left her piano to her beloved family.

Rebecca was a woman of great Christian faith, compassion, and integrity. She mastered the art of balancing strength and femininity. Though her demeanor was generally soft-spoken and compliant, she knew when to stand her ground and advocate for herself. She was a woman of grace and dignity, and she leaves behind a family rich in strong women and compassionate men. Through her unwavering testimony of faith in Christ, her family knows that they will meet her again in Heaven some glad reunion day. Until then, MeMe will be loved and missed by her adoring family and her many friends.

The family wishes to express sincere gratitude to the staff at Stonebridge Living Center in Conway and the exceptionally compassionate staff at Conway Regional Medical Center. The family also extends warmest wishes to John King, Rebecca's devoted companion at Stonebridge.

The family will receive guests at Roller-McNutt Funeral Home on Saturday, June 12th at 9:00 am with the funeral following at 10:00 am. Pastor Josh King of Second Baptist Church in Conway will officiate. Interment immediately following at Riverwood Memorial Gardens in Maumelle.