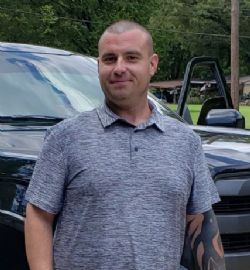 Jeremy Michael Richardson, age 36 of Lexa, Arkansas passed away Friday, April 16, 2021. Jeremy was born December 31, 1984 to Jerry Richardson and the late Rena Gibson Richardson. He was a truck driver and he loved big trucks and tractors, but more than anything, he loved spending time with his daughter, Adelynn.

Jeremy is survived by his father and stepmother, Jerry and Carole Richardson of Lexa; daughter, Adelynn Richardson of Helena; brother, Shane Richardson of Purdy, Missouri; stepsister, Rebecca Harter of Tullos, Louisiana; half-sister, Erin Swafford of Little Rock; and many other family members and friends.

He was preceded in death by his mother, Rena and his grandparents, Wayne and Ruth Richardson and Billy and Ruby Gibson.

A graveside service for Jeremy Richardson will be held at 11:00 a.m., Friday, April 23, 2021 at Sunset Memorial Park in West Helena. Visitation will also be Friday from 9:00 a.m. until service time at Roller-Citizens Funeral Home, West Helena. Brother Michael Dillinger will officiate.

Roller-Citizens Funeral Home is observing all local and state guidelines regarding COVID-19.