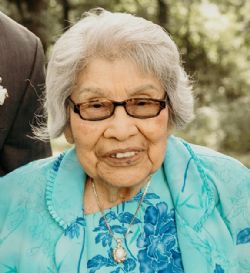 Lula Monongye Wilson passed away peacefully at home surrounded by her family on Thursday, February 25, 2021, at the age of 98. She was born September 1, 1922, to David and Nora Monongye of Hotevilla, Hopi Reservation, Arizona. She was the third of eight children and was the last surviving sibling. Lula was predeceased by her parents; her siblings; her husband of 54 years, Delmar C. Wilson; and her daughter, Phyllis Spradlin.

During WWII, Lula left the reservation in search of work. She initially worked in Phoenix then headed to San Francisco with a friend. There she heard about even better opportunities in Seattle, where she relocated to work at the Boeing airplane plant. She was one of many women in her generation who joined the war effort and became "Rosie the Riveter"! On her daily bus commute to the plant, a tall, handsome young man from Arkansas began to take notice of her - saving her a seat each day on the crowded bus. Delmar C. Wilson and Lula were married on March 26, 1945.

After the war, they lived in Parthenon, Arkansas, and their daughter, Phyllis, was born. A short time later, they settled in Grand Prairie, Texas, and their son, David, was born. Lula was a homemaker and when her children were older, she became a licensed cosmetologist, a profession that enabled her to use her gift of service and her gift of gab. While in Texas, the family was active in the Twin Airport Baptist Church, which later merged with Central Baptist Church. Lula and Delmar retired in 1979 and moved to the Wilson homestead near Parthenon, Arkansas. For over 40 years, Lula was a fixture at Parthenon Baptist Church as well as Jasper school athletic events where everyone affectionately called her "Granny". For a few years, Lula and Delmar ran the community mail route. She participated in activities hosted by the Newton County Senior Center until March 2020. She enjoyed gardening, reading Guideposts, and solving Find-A-Word puzzles.

Throughout her adult life, Lula enjoyed teaching Sunday school to preschoolers and served as a worker and teacher in Vacation Bible schools. Lula had the gifts of hospitality and encouragement and she delighted in serving others. Her prayer until the end was that everyone would know Jesus as she knew Him. Lula's family was a constant source of joy to her.

Lula is survived by her son, David L. Wilson and wife Nancy; her granddaughter, Chari Spradlin Hill and husband Chris; her granddaughter, Tina Spradlin James, and husband Denton; her great-grandchildren, Jene' James, Tyler Kidder, and wife Holly, David James, and wife Keely, and Shelby Kidder Foreman and husband Craig. Her two great-great-grandsons, Truman and Tripp Kidder, made her smile the most! She is also survived by many nieces, nephews, and other family in Arizona, Texas, Arkansas, and Missouri.

The family is appreciative of the many caregivers during her last few months, especially Christie Poole, Judy Williams, Alivia Barker, Regeina Young, Home Helpers - Rogers, and Hospice of the Hills.

In lieu of flowers, memorials may be made to Parthenon Baptist Church, P.O. Box 98, Parthenon, AR 72666.


Roller-Christeson Funeral Home is complying with the Arkansas Department of Health guidelines for COVID-19 and limiting indoor funeral and visitation attendance. All attendees must provide and wear their own masks before entering.