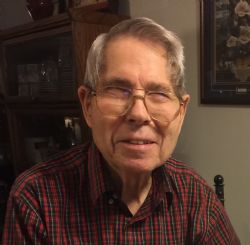 Jessie Coleman "JC" Henson of Crawfordsville, Arkansas, went to be with the Lord on Friday morning, February 19, 2021, after a long battle with Alzheimer's and Parkinson's. His wife, Pam, and a dear family friend were with him when he met his Lord Jesus face to face.
Always kind, JC had one of those rare personalities that if you met him, you'd never forget him.
JC was born on September 22, 1928, in Paducah, Texas. He served his country in the United States Marine Corps in 29 Palms, California, where he earned the rank of Corporal. He worked over the years as Service Manager for automobile dealerships in Texas, Tennessee, and Arkansas, and 21 years in industrial maintenance at The Wise Company in Memphis, Tennessee, where he was responsible for the maintenance operations of their six plants across the country.
He used the skills he had learned as a young man to design and build two homes, one of which is their current home in Crawfordsville.
JC's hobbies included car restoration, camping, bowling and traveling. He and Pam shared a love of Elvis and traveled to Las Vegas to attend his concerts on several occasions. He loved animals and rescued many strays.
He is survived by his wife of 52 years, Pam; sister, Dicksie Hodges; son, Michael Henson of Seagraves, Texas, and his wife Toni; grandson, Bryan Henson of Lubbock, Texas, and his wife Neisha; grandson, Brad Henson of Carlsbad, New Mexico, and his fiancé Nicole; and six great grandchildren, as well as many nieces and nephews. JC was preceded in death by his parents, Jessie Sr. and Maudie Belle (Hammond) Henson; sisters, Willie Fleming and Wilma Jeffries; and brothers, Coleman and LC Henson.
Visitation will be held Saturday, February 27, 2021 from 12:00 1:00 p.m., with funeral immediately following at 1:00 p.m.
Memorials may be sent to First Baptist Church, P. O. Box 64, Crawfordsville, AR 72327 or Community Bible Study, 790 Stout Road, Colorado Springs, CO 80921.

Roller-Citizens Funeral Home will be following guidelines issued by the Arkansas Department of Health and the CDC regarding COVID-19. Social distancing of at least six feet must be practiced and all funeral attendees must provide and wear their own mask.