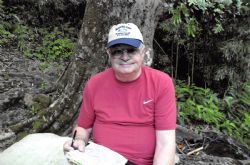 Terry Lynn Pogue, 77, of Mountain View, Arkansas, passed from this life on Saturday, February 20, 2021. Terry was born on November 8, 1943 in Sylamore, Arkansas to the late Clyde Francis and Pearl Annie Pogue. Terry's early school years were in Melbourne but he eventually transferred to Mountain View High School from which he graduated. He enlisted in the US Marine Corp in 1964. He was stationed in San Diego, California. Following his time in the Marine Corp, he returned to Mountain View where he and Betty Nichols (Pogue) began dating. Soon after marriage (to Betty of course) the decided to start their life together in Kansas City, Kansas, where they lived for five years and had one son, Lynn. Upon returning to Mountain View, Terry worked for the USDA Forest Service. While working for the Forest Service, Terry helped complete the second tour trail at Blanchard Springs Caverns, traveled to numerous states to battle forest fires, worked to maintain forest conservation, and helped maintain camping facilities in the recreational area. Terry won special recognition from the federal government in 1990 for his work in preserving America's Wilderness Heritage with the Primitive Skills Project in Leatherwood Wilderness. Terry enjoyed traveling (Hawaii was his favorite), watching NASCAR racing, baseball, football, boating, going to Sonic, reading western novels AND especially working crossword puzzles. Knowing Terry was to know he enjoyed eating; he would even gladly share recipes he found in the monthly magazines given away at Best Drug Store. Although Parkinson's slowed him down, Terry was able to still enjoy many years of retirement and will be sincerely missed by his loving family and friends. Terry was preceded in death by his only sister Joye Bagby of Mountain View, Arkansas.

Terry is survived by his loving wife of 51 years, Betty; his son Terry Lynn Jr and his wife Regina of Lewisville, Texas, along with a host of many loving extended family members and friends.