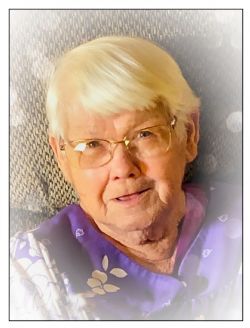 Maurdiece Massey Passmore, age 85, of Leslie, Arkansas passed from this life Sunday, February 21, 2021 at Baptist Hospital in Conway, Arkansas. She was born in Campbell, Arkansas on July 18, 1935 to Dewey and Ada (Morrison) Massey. Maurdiece married her high school sweetheart, Dykes Daniel Passmore on January 17, 1955 and they were blessed with two children.

Maurdiece loved children and spent many years at Leslie Headstart where she got to love every child like it was her own. After she retired, she was blessed to do the best job of all and be "Nan" to her grandchildren. Her best days were spent playing cards with her family, watching her "stories", or simply catching up with old friends. Maurdiece gave her life to the Lord at a young age and was a member of the Leslie First Baptist Church.