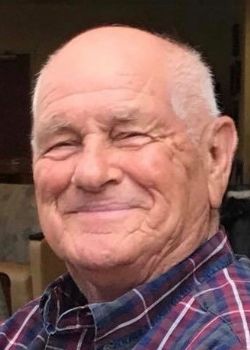 Billy Ray Goacher was born to Dave and Louise (Wilson) Goacher on November 19, 1936 in Aubrey, AR. The family moved to Hughes when he was 6. He lived in Hughes the remainder of his life, except for his military service in the Philippines and various bases in the US.

Billy was a great many things, faithful man of God, faithful friend, faithful servant, and loving father, grandfather, husband, brother, and uncle. He served his community for 20 years as a volunteer firefighter.

He was a fantastic family man. To him, family wasn't always blood related. He loved people and loved helping people. He loved to hunt and fish, but was happiest when he had his children or nieces and nephews with him on those adventures. During his last days, he talked about those times the most.

He never met a stranger and had no enemies. He loved to laugh and sing. He could fix anything or figure out how to make it work. Billy was strongly patriotic and loved his country. He served his country in the Air Force and was as a Korean War Vet. Being a veteran was a huge source of pride for him.

He is preceded in death by his wife of 38 years, Patsy, his son, Gary Ray, brothers, Sanford Goacher of Hughes and Cecil Goacher of Wynne, sisters Helen Coffey of Forrest City and Doris Jensen of Garden City, MO.

In lieu of flowers, the family is requesting donations be made to First Baptist Church, Box 25, Hughes, AR 72348.


Roller-Citizens Funeral Home will be following guidelines issued by the Arkansas Department of Health and the CDC regarding COVID-19. Social distancing of at least six feet must be practiced and all funeral attendees must provide and wear their own mask.