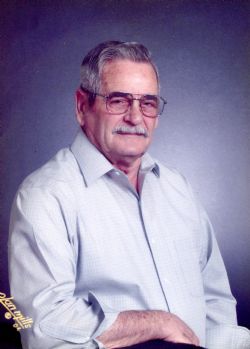 J. C. Loyd, 87, of Wilson, died Thursday at St. Bernards Regional Medical Center after a brief illness. He was born in Bassett to Carl and Ruby Ward Loyd on October 10, 1933. He lived in Dyess as a child and attended Dyess School. He joined the U.S. Army on December 1, 1953 and was assigned to the Fifth Armored Division. While serving as a transportation officer, part of his duties involved driving superior officers through Berlin. He was honorably discharged on November 30, 1955 as a Specialist Third Class. He returned home and was a truck driver for his entire career, driving across the country and in Mexico and Canada. He was a member of the VFW and retired volunteer at the Wilson Fire Department. He married Barbara Ann Felts on April 12, 1959. She preceded him in death on February 10, 2016. He was also preceded in death by his son, Glenn Loyd, on February 3, 2007, and by three sisters and two brothers. Survivors include two daughters, Robin Loyd and Donna Loyd Hilton and husband Kevin; one daughter-in-law, Karen Loyd, one brother, Carl Loyd Jr. and his wife, Betty; two sisters, Helen Hutcherson and Juanita Murphy; two granddaughters, Jessica Ford and her husband, Gene and Michele Baldridge and her husband, James; and three great-grandchildren, Kauri Rose and Evie Suzanne Ford and Liam Baldridge. Graveside services will be Sunday, November 8, 2020 at 2 pm at Mississippi County Memorial Gardens with Rev. Ryan Spurlock officiating. Honorary pallbearers are Bobby Byrd, Wayne Loyd, Dino Pirani, Lucky Smith and Robert Zenanko.