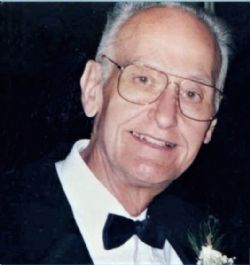 Bob Boyd, beloved husband, father, and friend, and long-time musician and entrepreneur, died Thursday, October 8, 2020 at the age of 84.

Bob was born at Mayflower, AR May 26, 1936 to J. A. Boyd and Minnie Ledrick Boyd. Bob was leader of his own band, most recently called the Bob Boyd Sounds, for over 50 years, in which he played piano, accordion and tenor banjo for thousands of private engagements and concerts all over Arkansas and surrounding states. Bob was married to Donnie Jean in 1960. Together, they established, owned and operated Boyd Music Center, a music store and teaching studio, from 1962 to 2000. Bob loved to encourage anyone who entered the store to try out any of the instruments that were of interest to them, and Boyd Music remained a friendly gathering place for musicians of all ages and skill levels to hang out, learn and play music during its 38 years of operation.

Bob was a long-time member and served as President of the Arkansas Grocers and Merchants Association, who awarded Boyd Music Center Inc. the title "Retailer of the Year," the only music company ever to receive that award. In 2015 Bob received the Legends of Arkansas Living Legend Award in recognition for a lifetime of inspiring musicians, and in 2018 was inducted into the Arkansas Jazz Hall of Fame. Bob was also a long-time member and served as Volunteer Arbitrator and Board Chairman of the Better Business Bureau of Arkansas. Bob was a Master Freemason and, for many years, was also active with the National Federation of Independent Business and served as their delegate to conferences in Washington, D.C.

Bob became an avid runner in the late 1970's and ran countless road races through the years, including five marathons. He was also passionate about many subjects and had an undying thirst for knowledge. His wonderful sense of humor and notoriously dry wit always kept those around him laughing, and his counsel and words of encouragement and wisdom were frequently sought by friends and family.

Bob attended Redeemer Community Church in Little Rock. He loved Christ, loved to study the Scriptures and was a member and sometimes leader of several Bible study groups. He will be greatly missed by his family and countless friends whom he loved dearly. He is survived by his wife, Donnie Jean (Huddlestun), one daughter, Melody Lynn Arsenault, and grandson, Cameron Boyd Arsenault, both of Wilbraham, MA, 5 nephews, 4 nieces, many cousins and a multitude of friends.

Family and close friends will gather for a private memorial service on Monday, October 12 immediately followed by a burial service at Mayflower, AR cemetery. The memorial service will be live streamed online at 11AM at www.redeemerlr.org for anyone who would like to attend virtually.