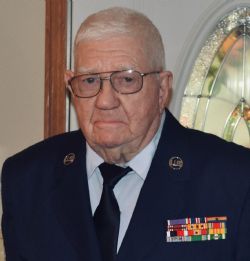 Robert E. Puckett, of Bono, Arkansas, died after a brief illness on July 25, 2020, he was born on May 26, 1926, in Bono, Arkansas, to Robert L. and Fanny N. Puckett.
Robert began work at the shipyards in Seattle at 16 years of age. His military career began when he joined the Marines in August 1944-July 1946, Army December 1946-June 1948, and Air Force July 1948 until he retired on July 31, 1969. Robert was a hero, he was in active combat during WWII, Korea, and Vietnam. After retirement from the Air Force, he went to work as an electrician in manufacturing, later gaining his license in commercial Heating and Air conditioning. He attended college in 1979 and graduated from Arkansas State University with a Bachelor of Science in Education. He continued working in manufacturing until he began substitute teaching in many local area schools.

Robert was a husband, father, brother, son, uncle, friend, and teacher. He liked cheese puffs, beer, a good bourbon, crackling cornbread, ham and beans, and any pastry made by ''Little Debbie''.

Robert collected ''stuff'' and also books, lots of books. He read every day, often in more than one book. He loved reading and he instilled in his family and friends the love of a good story.
His life as a soldier, electrician and teacher was a ''good story''. As a Sergeant he was a leader of men and as a teacher, a leader of minds.

He is survived by his wife of 67 years, Nancy K. Puckett, daughter Sharron Puckett Bradford, and son, Carl Puckett. He was predeceased by his two children, Catherine Emerson and Robert Puckett II, his parents, Robert L. Puckett and Fanny N. Puckett.

He was a lifetime member of The Most Worshipful Grand Lodge of A.F. & A.M. of Albuquerque, New Mexico, Disable Veterans Chapter 26, of Jonesboro Arkansas, Lifetime Member of Veterans of Foreign Wars and attended the United Church of God.

As our oldest living relative at 94, he will be missed as the patriarch of our family. He often said a line from a poem, ''old soldiers never die they just fade away''. Pop left an impression on so many of us, our memories of him will never fade away.

Services are under the direction of Roller-Farmers Union Funeral Home in Jonesboro, AR.