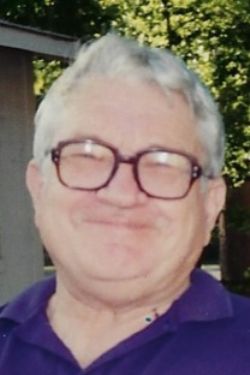 On Monday, January 6, 2020, James (Jim) Berton Bellcock passed away at the age of 88. Jim was born August 27, 1931 in Cooper, Iowa to Orves Roy and Winnie Bellcock. He served 22 years in the Air Force as a communications officer and navigator, serving during the Korean and Vietnam conflicts. After retiring from the Air Force, he went to Sunset School of Preaching, and spent 5 years as a minister in Wisconsin. In 1981, he moved to Searcy, and completed his Masters in Education. He taught school and drove a school bus for several years. He also served as a deacon and an elder at Four Mile Hill Church of Christ.

He was preceded in death by his first wife Sueyo in 1969 and his second wife Belva in 2014. He was also preceded in death by 3 brothers and 3 sisters. He is survived by 4 children: James (Tamara), Donald (Nancy), Karen (Earl), and Nancy (Nathan). He is also survived by 11 grandchildren: Amber, Adam, Corbin (Mandy), Drew (Anna), Lauren (Jonathan), Pierce, Aaron, Jenny, Tricia, Nate, and Jacob. He has 3 great-granddaughters: Annalynne, Adeline, and Juliet.

On Saturday, January 11, the family invites you to join them in remembrance of Jim's life at the Roller-Daniel Funeral Home in Searcy. Visitation will be at 1:30, funeral at 2:30, and graveside service with military honors to follow. In lieu of flowers, the family requests donations be made to Sunset International Bible Institute in memory of Jim Bellcock, class of 1975. www.sibi.cc