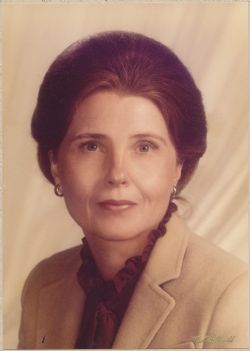 Nancy Lee Crain Balton, 82, of Memphis, Tennessee, passed away on May 24, 2018. Nancy was a loving wife, mother, grandmother, sister, and friend who served others humbly, with compassion, and filled with grace. She was strongly devoted in her faith and a lifelong member of the Wilson United Methodist Church where she played the organ for many years.

She was born on August 27, 1935, in Wilson, Arkansas, to the late Mary Edith Siler and John Enochs Crain. Nancy was raised in Wilson, where she lived for 80 years. She attended Ward Belmont in Nashville and graduated from Hutchison School in Memphis.

She married John Collins ''Jake'' Balton on December 29, 1953, and shortly thereafter began her first job as a florist at the Peabody Hotel. Later, she attended Memphis State University and received an Associate of Arts degree from the Mississippi County Community College.

Nancy spent much of her life as a devoted public servant, working hard to improve the lives of those in Mississippi County, Arkansas, a place so dear to her heart. She participated in numerous local, state, and national political campaigns. Nancy served as an Arkansas State Legislator from 1984-1990 and was a member of the Agriculture and Transportation Committees.

With her passion for agriculture, Nancy tirelessly worked with the family agricultural businesses, and was a supporter of Farm Bureau, Arkansas Rice Council, and Cache River flood control.

Nancy adored family gatherings during holidays, her dear friends, and the special PEO Sisterhood. She enjoyed sporting events, especially football and basketball, sunsets, and the vast outdoors. Nancy loved sharing with her grandchildren her affection for agriculture, horses, watersports, and, yes, politically provoking discussions. She found time to travel and maintain the beautiful home she built with Jake in Wilson, which was truly her favorite place. Nancy's solid faith and character were molded by the trials she experienced in life.

In addition to her parents, she was preceded in death by her husband, John Collins ''Jake'' Balton; her son, James Crain Balton; her brother, John Enochs Crain, Jr.; and her sisters, Judy Crain Benten, and Susan Crain Railsback.