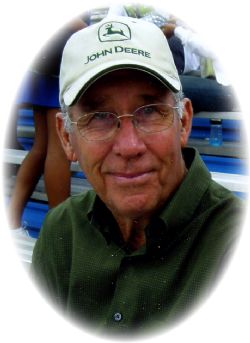 Carroll Leon Thrash, 77, of Greenbrier, went to be with the Lord, Wednesday March 7, 2018. He was born May 30, 1940 in Greenbrier to the late George Harry and Cora Lee (Kirby) Thrash. He grew up on a family farm in Deming, New Mexico where he learned about hard work. During his High School years he competed in rodeo in several events becoming the 1956 NM, State High School Champion Bull Rider. The Thrash family moved back to Arkansas in the early 1960's where he met his wife and lifelong companion, Meredith. Carroll worked various jobs but dreamed of running his own farm. He accomplished his goal in 1971 and became a lifelong farmer. He was joined by his son and grandsons who inherited his love of farming. He was rarely without one of his grandsons as a sidekick. He went to the farm daily and worked cattle until his last days. Carroll was a member of Springhill Baptist Church, former Faulkner County Farm Bureau Board member and Riceland Foods Local Dryer Director. He was dearly loved and will be greatly missed by many. Carroll was preceded in death by his parents, brother, Grady Thrash, and sister, Joyce Reynolds.

Funeral Service will be 11:00AM Saturday, March 10, 2018 at Springhill Baptist Church. Visitation will begin one hour prior at 10:00AM at the Church. Burial will follow at Springhill Cemetery.