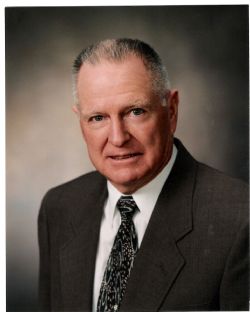 Charles Emmitt Capps, farmer, land developer and Bible teacher from England, Arkansas was promoted to heaven on Sunday, February 23, 2014. On Friday he informed family and close friends that he would be going home in three days, and as a man of integrity, a man of faith, and man of his word, he did exactly as he said.

A lifelong Arkansas resident, Charles was born in Brummitt, Arkansas on January 4, 1934. He farmed cotton, soybeans and rice in the England area until 1978, when he retired to become a full time Bible teacher.

In the early 1960's, Charles traveled extensively as a lay minister teaching personal evangelism with D.L. "Sam" Jordan in Assemblies of God Churches all over the United States. During this time, he also spent time ministering to the inmates at Tucker Prison Farm in Tucker, Arkansas. He was an active deacon and Sunday School teacher at the First Assembly of God Church in England, Arkansas for many years.

In the later 1960's, a meeting with Loren Cunningham led to a new venture of involvement with the organization, Youth With a Mission. Known in religious circles as "The Flying Farmer," Charles flew his Piper Twin Comanche aircraft to the Bahamas, where he led teams of young people in sharing Jesus Christ with residents of the islands.

While continuing his farming, Charles had a "chance" meeting with a newspaper salesman and a cab driver at the Keo Methodist Men's Breakfast which led to a profound change in his life. He was told about the ministry of Kenneth E. Hagin and given a small book called, Right and Wrong Thinking. The concept of "what we think we say, and what we say we believe" struck a cord with him and he began to study the Bible in a new light. He began to realize that his words had power, so he changed what he was saying and what he was thinking. It was a struggle to get out of the negative stream of life, but soon he saw the fruit of his words and his life began to change.

Invited to share his story at Full Gospel Businessmen's Fellowship meetings, his simplistic style of teaching practical truths from the Bible appealed to people from every Christian denomination. The requests for speaking engagements became so great after the printing of his pamphlet, God's Creative Power® Will Work For You, that he retired from farming and became a full-time Bible teacher, eventually authoring 24 books, including the God's Creative Power® series, with nearly 6 million copies sold. Many of the books are published in multiple languages.

When this farmer from England, Arkansas began to teach 15 minute segments on the radio, the response was overwhelming and the Concepts of Faith Radio and Television Broadcast was launched. With his down to earth style, Charles taught that our words are like seeds and we plant them into the ground of our heart by speaking them out loud. If you want soybeans to grow, don't plant Johnson grass seed! You reap what you sow.

His body or his "earthsuit," as he called it may be gone-but his message, his words, and his voice will continue to be heard far into the future.

Private services were held at Roller-England Funeral Home on February 25, 2014.