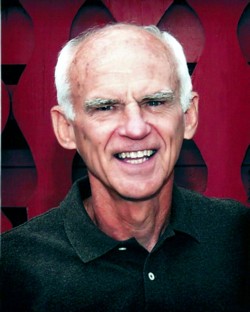 Ken Johnson, age 66, died September 30, 2013, at North Arkansas Regional Medical Center. Ken was born on March 17, 1947, at Gassville, Arkansas, the son of Jack and Mable (Wooten) Johnson. Ken was preceded in death by his parents.

Services were Thursday, October 3, 2013, at the First Baptist Church in Harrison, with Rev. Rob Davis and Rev. Tim Cooper speaking.

Burial was in White Church cemetery near his home and the mountains he loved.

Visitation was Wednesday, October 2, 2013, at the First Baptist Church.

He is survived by his wife, Betty (Perry) Johnson of the home; daughters, Tiffani and husband Cory Jutting of Holts Summitt, Missouri and Shawna and husband Mike Cunningham of Springfield, MO; son Kendell and wife Betsy Johnson of Bentonville; eight grandchildren, Bailey, Parker and Anna Jutting, Alex and Abby Cunningham, Madyson, Macy and Kennedy Johnson; one sister, Judy Kirksey of Flippin; two brothers, Terry and Paul Johnson of Flippin; and a host of other family and friends.

Ken was a member of the First Baptist Church here in Harrison. He and Betty met in Flippin on a blind date arranged by her cousin. They were later married on September 1, 1968, in Elkins, Arkansas. Ken graduated from the University of Arkansas with a degree in accounting. He moved to Harrison in 1970 to work with Myers, Scarborough and Baker, later becoming Beechold and Johnson. Ken worked as an independent contractor for IBM for many years as a programmer, developer and trouble shooter. Ken started Advanced Computer Services in 1977 and continued to work till 2010.

Although Ken was known by many for his hunting, fishing and outdoor hobbies, he was enjoying helping on mission trips after receiving his sight back. He and several friends made a couple of trips to Haiti where they were involved in building homes. He had recently registered for the Arkansas Disaster Relief team. Ken wore many hats and had a variety of gifts and hobbies, but he loved serving the Lord, his wife, children and grandchildren.